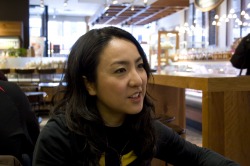 by Maude Abouche
24fr.yuki(elsa).jpg
Yuki Isami says her performance Branches et racines is a “summary of [her] history of living in Montreal.” PHOTO ELSA JABRE

Yuki Isami is building a bridge to Japan with only a handful of instruments.
This week she performs Branches et racines, a cross-cultural production that melds rising sun and the fleur-de-lys.

“It’s the connection of Japanese people and Québécois people, a summary of my history of living in Montreal. Since I came here, I see my culture from the outside,” explained the Japanese multi-instrumentalist. “We made a program that connects all the world and all generations as well, but the centre is Japanese culture. It’s the roots, and it opens into worldwide composers and music.”

Isami, who plays both western flute and traditional Japanese instruments, created the production in collaboration with Quebec composer Maxime McKinley. Drawing from the repertoires of composers Olivier Messiaen and Gilles Tremblay, Japanese instruments such as the shinobue, shamisen and koto will share the stage with piano and guitar.

“Here [in North America] we express ourselves, and it’s normal. In Japan, you have to guess what people are feeling,” said Isami on the cultural divide between the two societies. “We say that silence is beautiful. I think that’s why Japanese culture is so flashy. Because of this social culture and ambiguous attitude, when Japanese people express themselves, it explodes.”
Branches et racines is not merely a concert. Isami said video, lighting and staging will all work with the music to create an all-round experience that will suck the audience into a different world. And Isami not only hopes to offer the audience a taste of Japan, but of contemporary music as well.

The program has been in the making for more than a year, a lengthy period considering the performance will take place on a single night, with no plans for other dates. But it’s obviously a labour of love.

“It’s like cooking,” Isami said, drawing a parallel between her art and another one of her passions. “You spend so much time cooking, and then you open the oven, you wonder if it will be any good. It’s like cake! I put so much good energy and love into this, and I think that everyone will feel it, so I’m sure that this cake will be very good.”